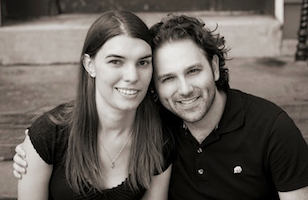 May 18, 2008 was meant to be one of the best days of Jacy Good’s life. Her college graduation day had gone smoothly, her family packed up her life into their station wagon, she said a temporary goodbye to her long-term boyfriend, Steve Johnson, and began the 90-minute drive to her home in Lititz, PA. She was ready to begin her dream job as a team leader with Habitat For Humanity a month later. But then everything changed…

About half of the way home Jacy and her parents entered an intersection with a green light while an 18-wheeler did the same in the opposing lane. However, on the intersecting road a young man was so distracted by his mobile phone conversation that he attempted to turn left… directly through his red light. The tractor-trailer swerved to avoid him, hitting Jacy’s car head-on.

Tragically, Jacy’s parents never left the scene. Jacy herself was left on the brink of death. After a miraculous series of events and nearly 9 hours of surgery Jacy was given just a 10% chance of surviving. She spent over 4 months in the hospital, with Steve by her side for 12 hours a day, every day. Though her bones healed, she was left with a permanent brain injury that renders her unable to use her left arm or lower leg.

Jacy was determined to use what happened to her to change minds, behaviors, and laws – and just as soon as she was able she began doing exactly that.

Jacy has been a guest on The Oprah Winfrey Show and of Secretary General Ban Ki-Moon at the United Nations’ ‘call to end the global epidemic of distracted driving’. She was a panelist at Maria Shriver’s 2010 Women’s Conference and was featured as a “Hero Among Us” in People Magazine. She has been profiled in many dozens of newspaper and TV pieces including a January 2015 CNN segment of The Human Factor. An August 2016 AT&T PSA starring Jacy went viral, with over 250 million views across social media.

In the Hang Up And Drive program Jacy recounts her tragic story along with her now husband, Steve, who details some of the holes in the story Jacy can’t recall on her own. We incorporate the frightening facts and stats about the distracted driving issue, currently the cause of a staggering 27% of all traffic incidents. The program is as informative as our story is shocking, and no audience member leaves without pledging to change his/her driving habits for good. We’ve been trained by the National Safety Council to deliver our message effectively and to help your school meet its safety goals.

Hang Up And Drive has been experienced by over 800 audiences in 33 states since 2011.

“I started telling the story of losing my parents (and nearly my own life) because I didn’t want other families to suffer the physical and emotional pain caused by preventable car crashes. I needed to make sense of what had destroyed my family and hoped to bring something positive out of the worst thing that had ever happened to me. I continue to share my life because people are still being hurt and killed on our roads every day due to the selfish choices drivers make behind the wheel. My life will never be the same, but maybe someone hearing my story will be inspired to make our roads safer and our world a little better.”

WATCH US IN ACTION