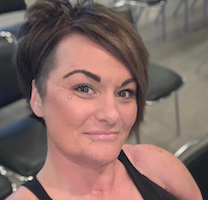 Sarah Panzau Evans grew up in the St. Louis suburb of Belleville, Ill., and fell in love with the sport of volleyball the first time she picked up a ball in sixth grade. From there, Sarah blossomed into a star player. She was a member of several select club teams and was a three-year starter for her high school squad. In college, Sarah earned Freshman of the Year honors and was named to the National Junior College Athletic Association All-America team as an outside hitter.

But off the court, somewhere between life as a competitively driven high school athlete and the early years of college, she began heading down a destructive path. She found herself hanging out with the wrong crowd and getting more out of drugs and dangerous levels of alcohol than hitting the books and spiking a ball.

In the fall of 2003, Sarah’s car – and her life – spun out of control. With a blood-alcohol level nearly four times the legal limit, on Aug. 23, the 21-year-old decided to drive home drunk, missed a highway exit and rolled her car four times. Without a seat belt, she was ejected through the rear window of her car, her left arm was torn from her body and she was thrown onto the roadway.

A year after the crash that cost Sarah her left arm – and nearly cost Sarah her life – she began to speak to students in her home state of Illinois about the poor decisions that led to her crash.

In 2005, Sarah became a sponsored speaker in the Midwest and now nationally. She has shared her story with almost 100,000 people over the years.

Sarah is living proof that poor choices can have drastic consequences. Since the crash in 2003, her life has taken a new direction. Despite the pain that Sarah endures from her poor choices, she wants to share her message with as many people as possible and allow individuals to learn from her rather than learning the hard way – as she did. Sarah has reached students at middle and high schools, as well as at colleges, with her messages about underage drinking, drunk driving, making smart choices, respecting parents and rising above disabilities.

“I was a senior who attended your presentation today at my school. I saw your email at the end of the presentation and I immediately knew I wanted to send you an email and thank you for coming to my school today. Your story was unbelievable and it just felt unreal in a way. In the 4 years that I have been attending my school, you have been the best speaker, by far. From the hardships that you’ve experienced from the accident and coming back from it, it is amazing and it’s incredibly strong for you to travel to our school and speak. It truly means a lot. Thank you so much!”